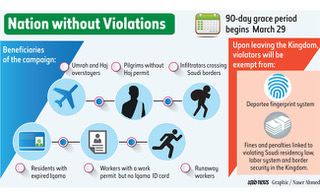 JEDDAH: Undocumented expat workers seeking to correct their status during the new 90-day-amnesty will be able to return to the Kingdom by adhering to legal procedures, the General Directorate of Passports (GDP) announced Monday on their official Twitter account @AlJawazatKSA. By approaching the Passport Departments to solve their status starting March 29, illegal workers “will be exempt from the consequences associated with the “deportee fingerprint system” and will be able to return to the Kingdom on the condition of pursuing legal methods to gain entry.The statement also added that illegal immigrants working on correcting their status during the 90-day grace period under the Interior Ministry’s “Nation without Violations” campaign would be cleared of any fines or penalties linked to violating the Saudi residency law, labor system and boarder security in the Kingdom.Those affected by the campaign are over-stayers, who came to the Kingdom for a Haj or Umrah visit or transit.Other individuals that will benefit from the amnesty are workers who came to the Kingdom with a work permit but did not obtain an Iqama identity card within 90 days after arrival; infiltrators crossing the Saudi border; residents with expired Iqamas; pilgrims who performed Haj without getting a Haj permit; and workers who escaped from their employers.Previously, illegal workers and over-stayers who have their fingerprints taken prior to deportation under the “deportee fingerprint system” were not allowed to re-enter the country.In 2013, a similar campaign took place to legalize the status of undocumented workers in the Kingdom. Back then, a three-month amnesty was announced in April 2013 before late King Abdullah extended the grace period to November 2013.Interior Ministry spokesman Maj. Gen. Mansour Al-Turki said that over 2.5 million violators left the country under that campaign.