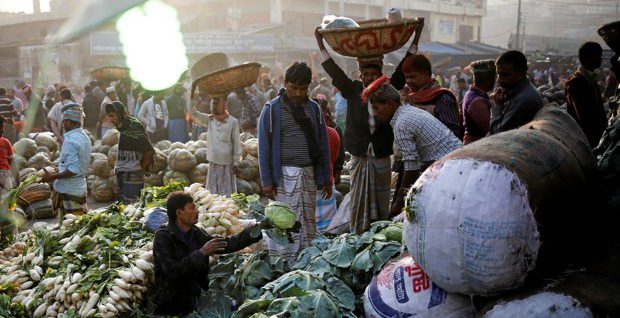 Geographically speaking, the Bangladeshi city has all the right criteria to be the “central point of human civilization.”

Politics and history aside, the single best place on Earth to build a city may be right where Dhaka, Bangladesh, sits. At least, that’s the conclusion that Wendover Productions, makers of snazzy explainer videos on things like failing trains and European density, comes to during its dive into the theories that explain why cities are located where they are today.

To understand what makes Dhaka—or rather, its location—so precious for cities, the video takes us to a 1930s theory by the German geographer Walter Christaller. Called the central place theory, it argues that cities and towns serve primarily to provide goods and services to surrounding areas. The more specialized goods a settlement has, the larger its sphere of influence. That’s what helps cities, which tend to have advanced hospitals and airports, for example, serve more people farther away. The idea is that people are willing to travel to use those services.

But Christaller’s theory is just that. It doesn’t account for variation in economics, social influences, and, more importantly, the topography of Earth. Mountains may form barriers to development for some cities, while providing a wealth of mineral resources for others. If cities are meant to provide goods and services, then access to resources is a must. Similarly, the video notes that 14 of the 15 largest cities developed near oceans and rivers; access to water is valuable for both trade and transport.

Lastly, it’s perhaps no coincidence that prosperous cities tend be in Europe and Asia. That region is also where the four largest empires persisted, and as far as one theory goes (and there are many), those emperors and kings can thank their lucky stars for the wide shape of those continents. Since emerging civilization, in the video’s explanation, depended on the domestication of plants and animals, it was easier to expand horizontally, where climate stayed pretty constant, than vertically.

That all brings us back to Dhaka, which sits in South Central Asia. It’s in the sweet spot that is Eurasia, with plenty of space to both its right and left for expansion. Does it have the mineral-rich mountains, waterways, and other resources it needs to prosper? Check, check, and check. Bangladesh’s hills and mountains are rich with minerals, biodiversity, and other forest resources. The city itself sits near several rivers, including the enormous Ganges-Brahmaputra delta, which benefits Bangladesh’s agricultural economy.

It’s worth noting, however, that this conclusion is strictly a geographical one. Between air pollution, poverty, and rising sea levels as a result of climate change, Dhaka has its fair share of problems that currently make it one of the least livable cities in the world. But had history played out differently, Dhaka could have been, as the video puts it, the “central point of human civilization.”