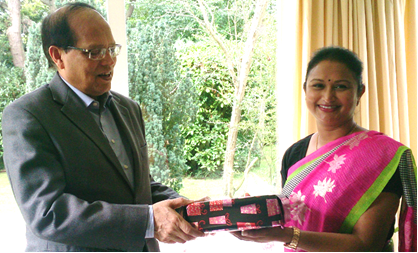 The Hague: Board members of BASUG held an exclusive meeting with the visiting Governor of Bangladesh Central Bank, Dr. Atiur Rahman on 13 September in the Hague. They discussed different issues including diaspora investment, latest world economic and financial updates and about Bangladesh,  remittances of migrants  and overseas workers and Bangladeshi Diaspora in particular.

The Hague meeting was a follow up of the last brief meeting of BASUG with the Governor at his chamber at Bangladesh Bank Dhaka on 3 August 2015. The meeting  discussed the policies and projects for possible collaboration abroad and in Bangladesh remittance management. 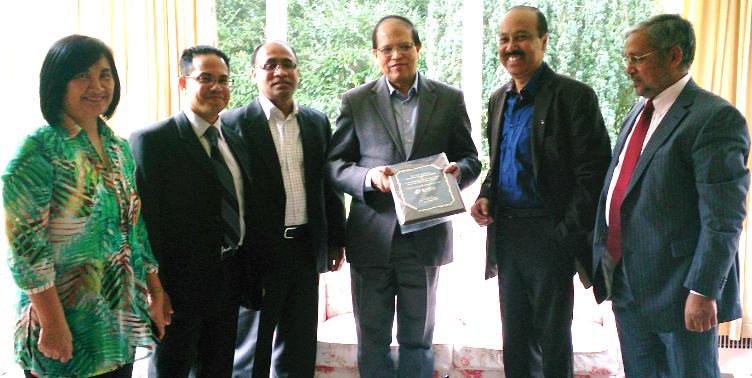 (BASUG Board members with Bangladesh Bank Governor, Dr. Atiur Rahman after handing over a crest to him)

Governor Dr. Atiur Rahman said that there are problems of how to manage remittances and avoid it as an instrument for money laundering and for being used for terrorism. There are measures that are being put in place but the Bangladesh Central Bank and other regulatory agencies need feedback about how these are experienced by migrants and overseas workers themselves so that improvements can be done e.g. learning  from the experience of other major remitting migrants and overseas workers like Filipinos. He advised BASUG to come up with concrete written proposals and recommendations about improving the remittance management.  He suggested BASUG to spearhead these initiatives to improve the remittance system and their uses in consultation with the migrants and overseas workers who are based abroad and their relatives left behind.

The Governor mentioned about the remittances of migrants and overseas Bangladeshis greatly contributing to the improved economic performance of Bangladesh. Everyone agreed that there must be ways to engage the Bangladeshi Diaspora and use the potential of their remittances more productively.  Projects can be done  abroad by (Diaspora) and in Bangladesh (family members and friends of Diaspora) in cooperation with organisations like BRAC and other

(Photo: Governor of Bangladesh Bank, Dr. Atiur Rahman at the meeting with BASUG Board members. On his left is Bangladesh Ambassador in the Netherlands, Mr. Sheikh Mohammad Belal)

financial intermediaries based in Bangladesh and abroad. BASUG chairman informed the Governor that there were two meetings with BRAC officials during their visit to Dhaka in August this year on how to provide support to the thousands of Bangladeshi migrants, both documented and undocumented, in Italy. BASUG and BRAC are working on finding out ways in this regard.

During the meeting Dr. Corazon Dee shared the project co-initiated by ERCMOVE, a diaspora organisation of Filipinos in the setting up of a Microsavings and micro investment association of Dutch of Filipino origin in The Netherlands.  The association is called EuroPinas investment Club (EPIC). As of now the portfolio is limited to blue chips stocks in the

(Photo: BASUG Board member, Purabi Nannan handing over a packet to Governor, Dr. Atiur Rahman after the meeting) receiving Netherlands and the US.  Bangladesh Bank Governor said that stocks are volatile. They propose bonds instead of stocks which are more stable. Report by-Dr. Corazon Dee