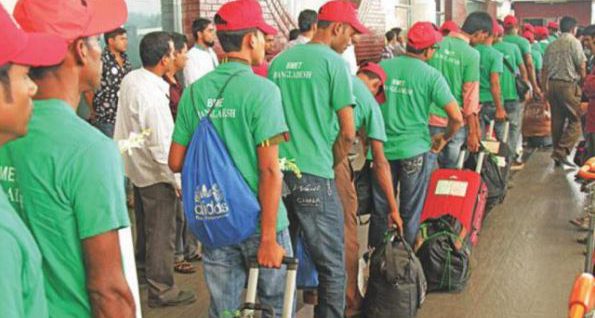 Bangladeshis account for 62,110 expatriates or 37 percent of the total expatriate workforce in the country, according to a report of the Malaysian home ministry.

There are also high numbers of expatriates from India, China, the Philippines, Japan and Indonesia, it says.

By law, these foreign employees must be paid a minimum of RM5,000 a month (RM1=BD Tk 18.69), and are categorised as “expatriates,” a term that Malaysia does not apply to foreign workers employed in jobs that pay less.

Meanwhile, Malaysian Trade Union Congress (MTUC) said many of the Bangladeshis being brought into the country as expatriates are not being paid the wages they are supposed to get.

MTUC Secretary-General N Gopal Kishnam claimed that the “expatriate” loophole was being exploited by those seeking to bring migrant workers into the country.

“Everyday, there are full flights from Bangladesh to Malaysia,” Gopal said, explaining that MTUC officials had visited various airports to observe what was happening on the ground.

“We spoke to the Bangladesh nationals and they told us that they had come to Malaysia as skilled and semi-skilled workers. However, they later told us that their salaries amounted to only RM1,000 a month, besides having to work 12 to 14 hours a day.”

He said the expatriate loophole had been exploited for over a year, but this intensified after the Malaysia froze the intake of foreign workers in February following hue and cry over the Southeast Asian country’s plan to recruit 1.5 million Bangladeshis over next three years.

Malaysia, which is home to some six lakh Bangladeshi workers, has been a popular destination for the Bangladeshis. The recruitment process, however, has always been tainted by malpractices that resulted in labour abuses.

Following massive irregularities during 2006 and 2008, Malaysia had frozen recruitment from Bangladesh early 2009. In late 2012, the country began labour recruitment in limited scale, but it did not work well allegedly for influence of recruitment agents having vested interests in both the countries.

Malaysia had declared recruiting 1.5 million Bangladeshis over the next three years through private sector, but it got halted following hue and cry by the trade unions and civil society in Malaysia over alleged involvement of syndicates that wanted to control the recruitment process.