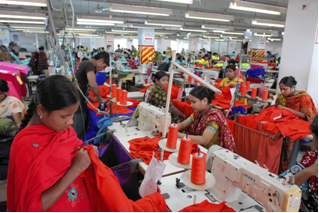 After holding the successful workshop in Hamburg on “Clean Clothes: Improve Occupational Safety and Health Compliances of Ready Made Garments (RMG) Workers in Bangladesh” on 21 March 2015, BASUG is now going to organize its next workshop on the same subject in Dhaka, Bangladesh on 1 August 2015 at BRAC Centre Inn. Hon’able Minister, Ministry of Industries, Government of the People’s Republic of Bangladesh, Mr Amir Hossain Amu has given his consent to attend the program as the Chief Guest. Different stakeholders including the foreign embassies, development and civil society organizations, rights based organizations, policy makers, garments buyers, trade unions, consumers, NGOs and MFIs working in Bangladesh will attend the event. Supported by German development organization CIM-GIZ, the workshop is being organized in collaboration with BASUG’s long time partner in Bangladesh, INAFI.

economically and socially. Nearly 4.2 million workers are employed in 5400 RMG factories across the country, mostly women, and again half of whom come from rural areas. RMG sector is the biggest export earner of Bangladesh with $24.49 billion of exports in the last financial year (July 2013-June 2014). Despite the huge growth of this sector and its bright prospects, there are challenges too. One of the biggest challenges being faced by RMG factories is to ensure workplace safety and better working conditions for the workers. Lack of safety compliances in RMG factories caused two grave incidents in recent past in Bangladesh- one is the fire incident at Tazreen Fashions Factory in Savar near Dhaka in 2012 and another one the is collapse of Rana Plaza Complex, also in Savar in 2013. The RMG workers, mostly women face many problems in the working places including safety and health risk, social risk, sexual violence etc. On this backdrop BASUG has been working on ‘Safety and health compliances’ issues to create awareness and improve occupational safety and health compliances in the RMG sector and ensure social security of the RMG workers in Dhaka and Chittagong, the capital and the port city of Bangladesh.