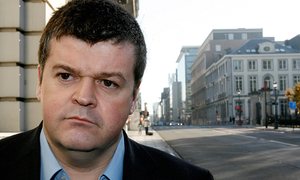 Bart Somers of the Belgian city of Mechelen was named world mayor of the year for his integration strategy. Photograph: Alamy Stock Photo

“A young man, an immigrant passing by, welcomed me, saying ‘Goeienavond meneer’. This never happened to me in Ghent or Courtrai or any other city, and I mean not to be unkind to the policymakers of these cities, but it was so remarkable to me that I will never forget this.”

That statement, from a Belgian who travelled to the city of Mechelen for a meeting, is one of the reasons Bart Somers has been named as world mayor of the year.

The world mayor prize is awarded every two years by the independent City Mayors Foundation. The 2016 prize, announced on 14 February 2017, recognises mayors who have made an extra effort to provide immigrants with the facilities to contribute to their city’s society, economy and culture.

Mechelen city hall banner of congratulations to its mayor

The world mayor jury notes that long before the flow of refugees from the Middle East and Africa became officially a “crisis” in the summer of 2015, Somers, who has been the mayor of Mechelen since 2001 and who is the leader of the liberals in the Flemish parliament, recognised the importance of integrating immigrants.

It says Somers has transformed a “rather neglected city into one of the most desirable places in Belgium” and that Mechelen has become a role model for integration. Residents of North African origin, who make up some 20% of the city’s 86,000 population, are “recognised and see themselves as full citizens of Mechelen” and Somers, who is also president of the Alliance for Liberals and Democrats for Europe group in the European Committee of the Regions, has emphasised that none of his city’s young Muslim men left to fight in Syria and Iraq.

The Belgian citizen who was so impressed on the streets of Mechelen says colleagues told him to leave the railway station by the back door to reach his meeting. “Usually the back of a railway station is not the way you want to get to know a new city,” he writes, in one of many nominations for Somers. “But this part of the city was very well renewed. Young families had invested their money to make their new home there: both young people born in Mechelen, but also young people who had their roots abroad. This became clear to me during my walk to my destination, not only by seeing a big mixture of the people, but most of all because of the fact that these people were talking to each other in the street.”

Wolfgang Müller, the mayor of Lahr, in Germany, has been named first runner-up and was commended for services to integration. According to the foundation, Lahr has become a German and European success story, having integrated about 9,000 immigrants from the former Soviet Union. Second runner-up and commended for services to refugees is Georgios Kaminis, the mayor of Athens, which in 2015, found itself coping with one of the biggest movements of people since the second world war.

Previous winners of the world mayor title include Tirana’s Edi Rama (an exhibiting artist), who was responsible for repainting the Albanian city’s communist-era grey buildings vibrant pink, orange and green; Athens’ Dora Baokyannis, who led the city through the 2004 Olympic games; and Hong-Kong-born Melbourne mayor John So, for his popularity and role as “an immigrant success story”. In 2012 Iñaki Azkuna was awarded for his key role transforming Bilbao from a declining industrial city … to an international centre for tourism and the arts. The 2014 accolade went to the mayor of Calgary, Naheed Nenshi.

Join our community of public service professionals. Follow us @Guardianpublic

… we’ve got a small favour to ask. More people are reading the Guardian than ever, but far fewer are paying for it. Advertising revenues across the media are falling fast. And unlike some other news organisations, we haven’t put up a paywall – we want to keep our journalism open to all. So you can see why we need to ask for your help. The Guardian’s independent, investigative journalism takes a lot of time, money and hard work to produce. But we do it because we believe our perspective matters – because it might well be your perspective, too.

If everyone who reads our reporting, who likes it, helps to support it, our future would be much more secure.