‘Blockade’- the documentary film screened in The Hague 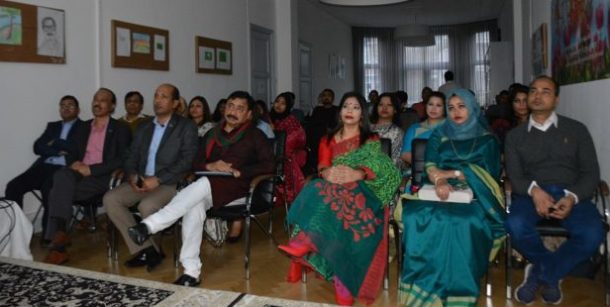 26 November 2018, The Hague: Only a week before the month of Victory, Embassy of Bangladesh in the Hague organized screening of a liberation war documentary on 25 November 2018. A full house attended the screening of ‘Blockade’ based on true story.

‘Blockade’ documentary is the story of nonviolent protest to stop the shipment of arms from the US to Pakistan during the 1971 Bangladesh Liberation War. Blockade tells the story of how a group of American and Bengali activists protested against the U.S. government’s military and economic support for Pakistan during the war by staging a non-violent blockade of Pakistani ships in East Coast ports.

Drawing upon rare archival images of the protests and direct interviews with key activists, Blockade offers a powerful reminder of the lengths that ordinary people around the world went to in order to stop the genocide in Bangladesh. Encouraged by the Father of the Nation Bangabandhu Sheikh Mujibur Rahman’s historic 7th March speech, when people of Bangladesh orchestrated their protests, the Western media gradually came to know of the horror unleash by the Pakistani forces.

Bangladeshi IT expert, based in New Jersey, Mr. Arif Yousuf directed and produced the documentary. This documentary is the winner of 2017 The World’s Independent Film Festival(TWIFF) award, San Francisco, California in the category of documentary.

Their non-violent activism eventually forced some of those ships to return empty. Amidst the denial of the US government, they come up with an idea to create public/media awareness by a symbolic blockade with canoes and dinghies in front of the oceangoing ships that were being used for supplying arms to Pakistan.

The groups successfully organize non-violent protests and generate a huge national media interest on the matter. The activists then go on to influence other groups and make a substantial impact on public opinion in US and overseas. Through interviews, archival TV footage and photographs, the film weaves in historical accounts of the genocide in Bangladesh, the misguided US foreign policy towards Pakistan at that time, and the common man’s protest against injustice.

H.E. Ambassador Sheikh Mohammed Belal congratulated the director for his successful making of the documentary and thanked him for sharing his film with the Embassy for screening. On the eve of the month of victory, Ambassador Belal paid tribute to the Father of the Nation Bangabandhu Sheikh Mujibur Rahman, Martyrs and Freedom Fighters of 1971.

Referring to how Bangladesh Prime Minister,  know as ‘Mother of Humanity’, recalled Bangladesh people own sufferings during Pakistan preoccupation, when Bangladesh  opened the door for displaced people of Myanmar i.e. over a million Rohingya in Bangladesh. He urged Bangladesh nationals to come forward from their respective position to promote Bangladesh’s achievement to the international community. The audience expressed their satisfaction for organizing the screening of documentary film which surely enhanced their knowledge about Bangladesh liberation war.

Photography by the Embassy of Bangladesh in The Hague.