Berlin, June 25 (NdM/BASUG):  The closing ceremony of the year long trainee program of the New German Media Professionals (NdM) for 2016-2017 young journalists was held in a royal atmosphere in the German Chancellery in Berlin on Tuesday.

A total of 25 young media professionals with migration background were mentored with the senior German media colleagues for one year and they had the opportunities to sit and discuss on different professional and technical issues related to media fields in Germany. The training program included the visit of editors meeting in TAZ, Deutschlandfunk and Spiegel Online, seminars and workshops on mobile journalism, investigative journalism, collaborative journalism and journalism on migration, refugees and integration issues. The closing ceremony of the training program was hosted by the Minister of State in the German Chancellery and Commissioner for Immigration, Refugees and Integration in the German Federal Government Aydan Özoguz. 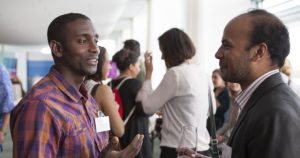 In the podium discussion the trainee Thuy-An Nguyen and her mentor from WDR Asli Sevindim and the trainee Omid Rezaee and his mentor from Die Welt Wolfgang Zügel shared their experience and opinions on the existing media environment and demands of German media. Another speaker was the Ressort Chief of Culture Department from Spiegel Online Enrico Ippolito, who took part in the panel discussion. Moderated by the Chief Executive of NdM Konstantina Vassiliou-Enz the panel stressed on the importance of the financial support during the internship of young media professionals in the media houses. They added, they cannot acquire the necessary competence as an apprentice, when they have financial hardship in the daily life. This is the reality equally even in the case of young professionals without migration background. So it does not fit only for the exile journalists or expatriate ones.

Mentionable that, the NdM trainee and BASUG Project Coordinator AHM Abdul Hai under this training program won the best award from Hostwriter in 2016 along with two other Bangladeshi journalists Riazul Islam and Mir Zabeda Yeasmin for their report on the sufferings of the Bangladeshi refugees in Germany.