Home > Bangladesh Migrant workers came back to Bangladesh in pandemic. Now their wait at home is too long

Mahbubur migrated to Bahrain in 2006 after borrowing a large amount of money and started borrowing again to run his family 14 years later.

“Chances to go back to Bahrain are becoming slim as days pass. I don’t know what to do,” he said.

Mahbubur is the only breadwinner in his family and facing hardship as he could not get any job in Bangladesh.

Dreaming of a better future, Md Kabir Hossain, 32, a worker from Kaliakoir in Manikganj left for Qatar in 2010. He began to work as a cleaner and after working in several roles in different sectors, he has settled as a worker in a gas plant.

Kabir, who came home on a vacation in January, cannot go back to Qatar now. He came prepared to stay home for two months, but more than six months have already passed. “I want to go back to Qatar but don’t know how I can,” he said.

Kabir, once a driver in Bangladesh, has already borrowed a lot of money from his relatives. He is worried over his future.

More than 10 million workers like Mahbubur and Kabir are the driving force of the economy. Among them, more than 100,000 workers are unable to return to their workplaces after they came home amid the coronavirus pandemic.

Almost 80,000 expatriate Bangladeshi nationals returned home from abroad in the last four months amid the coronavirus pandemic, according to the Ministry of Expatriate Welfare and Overseas Employment. 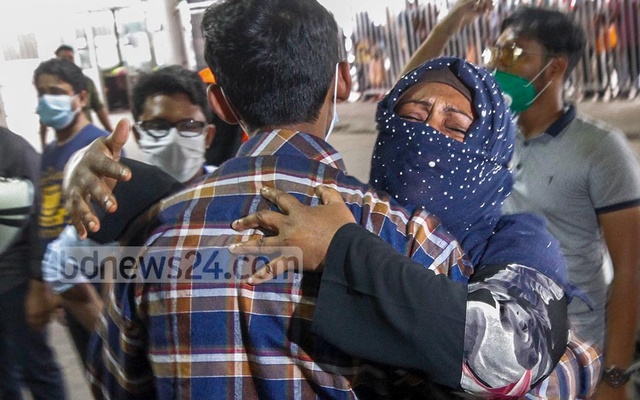 The highest number of workers — 25,653 — returned furloughed from the United Arab Emirates.

As the Maldives has a tourism-based economy, the employers sent back 7,909 workers after the tourism industry was upended by the pandemic. After their contracts were over, 1,382 expatriate workers returned from Singapore. At least 7,329 Bangladeshi workers returned home from Kuwait after their visas expired.

A total of 11,133 workers returned from South Africa, Qatar, Malaysia, Thailand, Myanmar, Cambodia and Iraq due to scarcity of jobs. Also, 116 workers returned from Sri Lanka and Mauritius, while 100 came from South Korea, 1,026 from Jordan, 122 from Vietnam after their contracts were over. On Jul 6, Italy repatriated 151 Bangladeshi workers suspected to be infected with the coronavirus.

The pandemic left thousands of migrant workers marooned in Bangladesh, said the officials in different organisations working for the migrants.

The government should continue its diplomatic efforts to ensure those workers can go back to their workplaces, they said adding that the migrant workers should be included in the humanitarian aid programmes the government opened to cushion the effects of the pandemic.

More than 200,000 workers came home for holiday from February to March when the flights were still open, Shariful Hasan, head of the Migrant Programme at BRAC, said citing the home ministry and Expatriate Welfare Desk. They could not return to their workplaces as of now. Another 25,000 workers came back in chartered flights.

“On an average, 50,000 to 60,000 migrant workers go overseas. Due to the coronavirus pandemic, almost 250,000 workers could not go overseas from March to July. At least 100,000 workers failed to go despite having valid visas, passports and other documents,” he said.

The workers’ return to their workplaces depends on two factors — a green light from their employers and the alleviation of the coronavirus epidemic in Bangladesh, he said. “These two are interrelated.”

“The employers will never ask them to return to work unless the situation in Bangladesh goes back to normal. Some of the countries are gradually opening their doors to migrant workers but Bangladesh could not make it to that, as the coronavirus crisis is yet to be eased,” he said.

The government should, therefore, focus on alleviating the coronavirus crisis at home, Shariful Hasan said.

Bangladeshi workers will not be allowed to enter several countries until October as the authenticity of the coronavirus testing certificate in Bangladesh is questioned, said Tasnim Siddique, president of Refugee and Migratory Movements Research Unit.

The government should highlight the measures they took against the issue and ensure that the certificates are authentic, she said adding the government must continue its diplomatic efforts to prevent repatriation of workers. 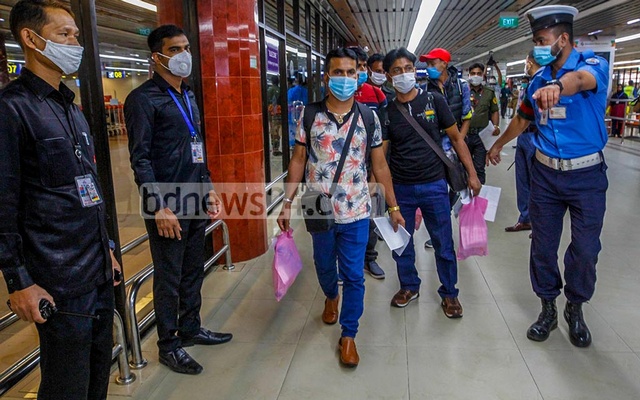 “The overall situation has improved.”

The government has initiated a Tk 5 billion project to provide loans to those expatriate workers who could not go back to their workplaces, while the Ministry of Expatriate Welfare and Overseas Employment provided Tk 2 billion from the wage earner welfare fund, said Tasnim adding the aid should be planned and coordinated to ensure the best results for workers.

The government will try to employ those workers who could not return to their workplaces, said Imran Ahmed, minister of expatriate welfare and overseas employment.

“The pandemic has upended the global economy. We are preparing to fight it by taking up different programmes.”

The poor and disadvantaged migrant workers already repatriated and also the families of those workers still overseas will be brought under the social safety net and other aid programmes, he said.

Those workers repatriated due to the coronavirus pandemic are receiving Tk 5,000 in aid after completion of the quarantine period, the minister said. Also, the government opened a Tk 7 billion fund for the migrant workers, including a Tk 2 billion loan programme for their rehabilitation. They have taken the initiative to train them and send them for overseas employment again.

Experienced workers coming back from overseas will receive certification of their skills. The government will provide Tk 100 million for emergency food aid and other assistance for expatriate workers abroad.

Each of the families of migrant workers who died from COVID-19 will receive Tk 300,000 in aid as soon as possible.