How female migrant workers changed the face of their village

Basotpur Colony village in Jessore went through a transformation in the last three decades, becoming the wealthiest village in the union from the poorest.

It would not be surprising, in this day and age, to find a number of expats from any of the villages scattered around Bangladesh. People have been trickling out of Bangladesh over to the Middle East for decades. However, inside the boundaries of Basotpur Colony in Sharsha Upazila of Jessore, the scenario is completely new. From being one of the poorest villages in the union, Basotpur Colony has turned into a place for educated and wealthy villagers. And the change can only be credited to its main workforce- the female expats.

Only 10 years ago, Basotpur Colony was one of the most impoverished villages in the union, according to information provided by Baganchara Union Parishad in Sharsha Upazila of the district. The agro-lands of the village would be underwater 8 months a year and people would catch fishes to survive. The men of the village did not have any jobs, with the majority of them working as day labourers.

Things started to change when Jahanara Begum, wife of Billal Hossain, left for the United Arab Emirates on 1991 as the first female expatriate. She worked as a house maid for several years before taking her husband, brothers, sisters and relatives to UAE.

“I had never dreamt of good food and a house while I was in my village. The villagers led hopeless and frustrating lives. So one day, I made up my mind to go the United Arab Emirates. An Indian expat helped me with my visa,” Jahanara Begum told the Dhaka Tribune.

“At first the locals opposed my decision and tried to stop me from following my dreams,” she continued. 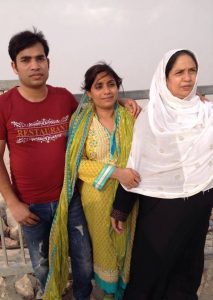 Jahanara Begum (left) unknowingly changed the fate of her entire village when in 1991 she decided to cross thousands of miles in search of work. Here she stands with her children, who are now also working abroad.

“But I did not listen to them. I was the first woman to leave my village and fly to the UAE. Now I am happy that I got to fulfill my dreams.”

Now the once poor village has turned into one of the richest villages in the union. Nearly 1,600 women and 600 men of the village are working in different countries in the Middle East, according to the information relied by Bangachara Union Parishad. These expatriates with their income earned abroad have changed the circumstances inside Basotpur.

“I had nothing to lose. At home I had four children, a sick mother-in-law and others to feed. But I had no income source. My husband made little money and could not support our large family. So I decided to risk everything and left for the Middle East. Now, nearly 2,000 people are working abroad and sending their money home,” said Jahanara Begum.

According to the locals, in 2000, the village faced the devastating consequences of a flood which caused terrible food crisis throughout the entire area. During the flood, the villagers survived upon government provided reliefs. After the flood, the women finally made up their minds and began migrating to the Middle East.

Rokeya Begum, a housewife from the village who has lived in the UAE for eight years, told Dhaka Tribune that she was forced to leave her two-year-old daughter and seven-year-old son because of the overwhelming poverty. After returning from the UAE in 2011, she built a fully furnished two-storey building in her village. Her daughter is now studying in a college in Dhaka and her son is a businessman.

The chairman of Baganchara Union Parishad, Ilias Kabir Bakul, said: “The expat women have changed the scenario of this village, turning it from the poorest to the richest. They are a blessing to us.”

Rezaul Islam, the first ever person to study in Dhaka University from Basotpur, told the Dhaka Tribune: “People from my village never dreamt of pursuing higher studies. Their only thoughts were of food and survival. There were only two or three people in our village who had passed SSC. But now we have many kids from here studying all over the country, some even in Dhaka University.”

Rezaul’s elder sister has been working in Oman for the last eight years while his brother has been in Malaysia for seven years.

“Our women make us happy. They changed the financial state of the locality. They are the faces of women’s empowerment. I am proud that my sister is also an expat and has helped to expand the economy of the village,” he said.

Ismail Hossain, Jahanara’s brother and a teacher of Basotpur Colony Government Primary School, said: “Our women have changed the lifestyles of the men in our area. Now women from other villages are taking their lead and going to the Middle East to seek employment. But my sister Jahanara was the pioneer and flag bearer.”