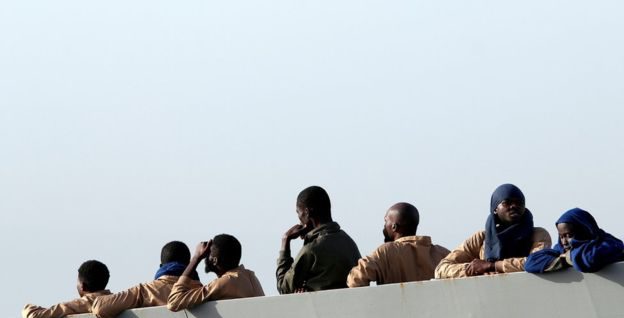 AP More than 150,000 migrants have been rescued from the Mediterranean and taken to Italy so far this year

Amnesty International said it had 24 accounts of ill treatment, including beatings and electric shocks.

Italy’s government rejected the report’s findings as “totally false”. There was also scepticism from the European Commission.

Under EU rules, migrants must stay in the first country they reach, which is determined by where they give their fingerprints.

Many irregular migrants are therefore reluctant to be fingerprinted, fearing they will not be able to leave Italy.

Amnesty said the behaviour of most Italian police officers involved was professional but it called for an independent review of the allegations.

“The European Union’s pressure on Italy to ‘get tough’ on refugees and migrants has led to unlawful expulsions and ill treatment which in some cases may amount to torture,” the organisation said.

A 25-year-old woman from Eritrea said she had been slapped repeatedly in the face by a policeman until she agreed to be fingerprinted, and a 16-year-old boy and a 27-year-old man said police had applied pain to their genitals.

The older man said: “I was on a chair made of aluminium, with an opening on the seat. They held my shoulders and legs, took my testicles with the pliers, and pulled twice. I can’t say how painful it was.”

Amnesty also highlighted the dangers faced by migrants who are returned to their country of origin.

The report quoted a 27-year-old man from Darfur in Sudan who said he had been put on a flight back from Italy. He said the security forces had been awaiting his arrival in Khartoum.

“They took us to a special area in the airport,” he said. “I saw one man beaten…We were interrogated one by one.”

The head of Italy’s immigration department, Mario Morcone, said the report was bewildering and that lies had been told. He also pointed out that UN staff were based at the “hot spots” where migrants arrived in Italy.

Reuters Migrants reported having pain inflicted with pliers and electric batons Matteo de Bellis, Amnesty’s Researcher on Italy, told the BBC that migrants had been subjected to “appalling abuse”.

Amnesty criticised the EU’s so-called “hotspot” approach – designed to identify and fingerprint new arrivals to front-line EU countries such as Italy – saying it had led to violations of migrants’ rights.

“The hotspot approach, designed in Brussels and executed in Italy, has increased, not decreased, the pressure on front-line states,” said Mr de Bellis. “It is resulting in appalling violations of the rights of desperately vulnerable people,”

European Commission spokeswoman Natasha Bertaud said the EU’s executive had no knowledge of migrants’ rights being violated at the hotspots, either from European agencies or non-government bodies.

More than 150,000 migrants have been rescued from the Mediterranean and taken to Italy so far this year and more than 470,000 have reached the country by boat over the past three years.

Many thousands have died making the crossing, including at least 3,750 this year alone.