Nearly 5,000 take part in march against Aussie policy on refugees 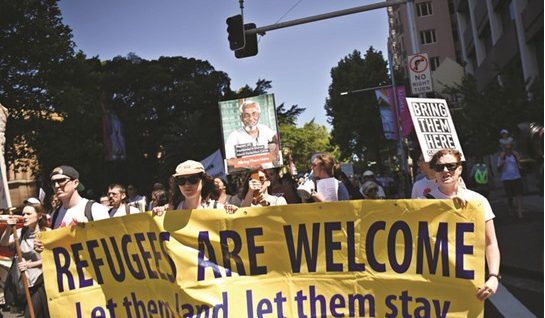 Around 5,000 people gathered in Sydney yesterday to protest Australia’s policy of keeping refugees and asylum seekers in detention offshore.
Approximately 1,600 people are currently being kept in Australian-run offshore processing centres in Nauru and on Papua New Guinea’s Manus Island.
The centres were set up after the Australian government determined in 2013 it would no longer process them in Australia.
The protest in Sydney coincided with more rallies organised around the country by Doctors for Refugees.
Events took place in Melbourne, Hobart and Cairns and other locations.
They comes just a week after the government announced it planned to introduce a bill seeking to ban for life all refugees who had ever attampted to reach Australia by boat.
That would mean that even those who eventually secured a legitimate visa would never be allowed to visit Australia.
Protesters in Sydney, carrying banners and photos of refugees, chanted slogans demanding the government close the centres and bring the asylum seekers to Australia.
They marched through the central business district to Circular Quay, located near the Sydney Opera House.
“We are very happy with the turnout,” said Barri Phatarfod, a protest organiser from the group Doctors for Refugees “It shows that people from all spectrums of life are very worried and appalled about the situation in the offshore detention centres.”
“We want them to close. They have been an abject failure. We are planning to continue the pressure on the government to change its policy on refugees and asylum seekers,” Phatarfod added.
Evan Davis, who worked in Nauru as a teacher for two years, said that what he saw in Nauru quickly turned him into an activist.
“It’s the government’s policy on how children are treated there that makes us speak. It’s our obligation to speak out against the mental torture, the physical harm, the violence, fear, imprisonment, loss of hope, denial of education, and theft of their childhood,” Davis said.
Last month Amnesty International said the government refugee policy amounted to “systematic torture” that turned the detention facilities into “an open-air prison designed to inflict as much suffering as necessary to stop some of the world’s most vulnerable people from trying to find safety in Australia.”
The government says that the policy deters people-smugglers and prevents people from undertaking the hazardous boat journey to Australia.
The Amnesty report said mental illness and incidents of self-harm among the asylum seekers, especially children, were shockingly commonplace.
Ingrid Zoebe, 67, an activist with a group of grandmothers against detention of refugee children, said she was participating in the protest “to stop the appalling treatment and suffering of the children in the detention centres.”
“I am from Germany and I have lived here for 32 years. I do not want a government that commits crimes against humanity,” she said.
“The Australian government’s policy is complete bullshit and they keep coming with worse ideas, like lifetime ban for those who tried to come by boat.”