2.72 lakh returned in 7 months; govt efforts for their economic reintegration fail to yield expected outcome
After years of struggle, Mostakim Alam landed a job at a digital printing shop in Kuwait as a computer operator. With earnings of Tk 1.20 lakh a month, all was going well.

Then came the novel coronavirus, bringing with it a sudden and impactful cascade of disruptions to his life. Losing the job, he eventually returned home in May from the Gulf country where he had been working for six years.

Over six months on, the 30-year-old from Khulna’s Paikgachha upazila is now finding it hard to maintain his family.

“I am unemployed now,” Mostakim, a father of two, told this newspaper by phone recently.

The condition of Masum Mia, 24, is better off to some extent.

After remaining jobless since his return to the country on May 10 from Bahrain, the migrant from Brahmanbaria started a small tea-stall in his area last month. He worked in Bahrain for eight years.

Now, he is struggling to make ends meet with the income from his shop. His six-member family, including his parents, depend on him.

“Had it not been for the pandemic, I would still be in Bahrain, working at the cosmetics shop where I used to work. Now, the future looks uncertain,” said Masum.

Mostakim and Masum are among thousands of Bangladeshi migrant workers who returned home almost empty-handed in recent months after job losses in the host countries amid the pandemic.

According to Expatriates’ Welfare Ministry data, about 2.72 lakh Bangladeshi expatriates returned home between April 1 and November 11 this year after coronavirus struck.

Stuck at home for months, most of them see a bleak future ahead with no prospect of a job anytime soon in the host countries. The government’s various initiatives for their economic reintegration could not yield benefits to the bulk of the returnees, said migrant rights activists.

The initiative to provide the returnees with a special loan under a Tk 200-crore fund saw poor response.

Between its launch on September 21 and until mid-October, a little over Tk 1 crore from the Tk 200 crore special fund was disbursed.

About 60 applicants received the money, according to Probashi Kallyan Bank.

As reasons behind the poor response, migrant workers and rights activists found some terms and conditions for getting the loan tough to fulfil. They said the four percent interest rate for a loan up to Tk 5 lakh is high considering the financial condition of the returnees. Besides, the grace period against loan in most ventures is limited to one month only. Therefore, returnees have to start paying instalments almost immediately after taking the loan, they added. 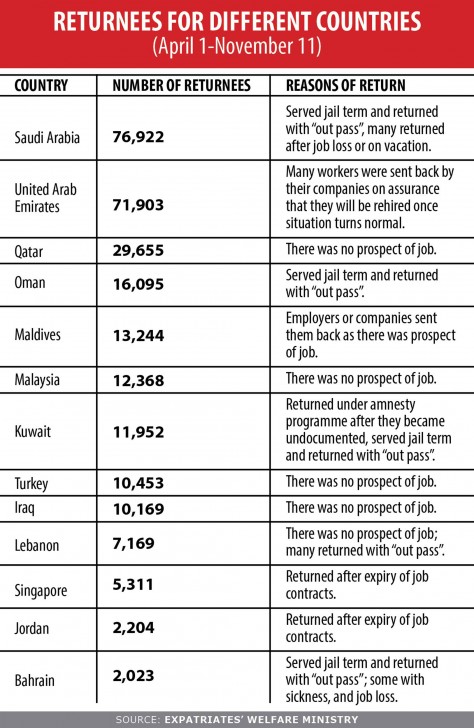 “The government’s reintegration initiatives should reach the returnees in their areas,” said Shariful Hasan, head of Brac Programme.

“Now, the migrants [who returned] have to rush to banks, and here and there,” he said.

In a survey report published in May, Brac said about 87 percent of 558 returnees did not have income opportunities amid the pandemic.

The telephonic survey, conducted in 13 migration-prone districts in April, found 84 percent returnees were uncertain about their future plans.

Six percent wanted to go back to their workplaces abroad and others thought about small scale agro-based business or groceries at home, said the report titled “The Impact of Covid-19 Pandemic on the Life and Livelihoods of Returnee Migrants”.

Shariful said services like training or enterprise offers could be taken to those areas under a comprehensive initiative. This will make it easier for the returnees to pick the right opportunity.

He said the bulk of the Covid-19 affected returnees are from 10 to 12 districts.

International Organisation for Migration (IOM) in a report published in August found about 70 percent of 1,486 returnees in 12 migration-prone districts were unemployed.

The survey for the report titled “Rapid Assessment of Needs and Vulnerabilities of Internal and International Return Migrants in Bangladesh” was conducted in May and July. The migrants came home between February and June.

About 75 percent respondents wanted to re-migrate and 97 percent of them wished to go back to their host countries, it said, adding returnees experienced reintegration challenges, including difficulties in securing employment, financial problems, and health-related issues.

Shariful Hasan said the government needs to consider whether the returnees intend to re-migrate anytime soon.

It was seen in the past that many returnees did not feel comfortable doing something at home. Instead, they intended to re-migrate, the Brac official added.

Opportunities should be there so that returnees intending for re-migration can get involved in ventures for the short term with the option that they will be able to hand it over to family members before going abroad, Shariful added.

Meanwhile, Refugee and Migratory Movements Research Unit, a migrant rights group, in a report portrayed the picture of migrant workers’ condition by comparing their household expenditures.

The report published in July found that the average monthly household expenditure of migrant workers’ families dropped to Tk 7,300 during the pandemic from Tk 17,000 previously.

The report titled “Impact of Covid-19 on International Migrant Households”, which was based on telephonic interview of respondents in 21 districts, said for 57 percent of 200 households surveyed, remittance was the only source of income.

Shakirul Islam, chairperson of Ovibashi Karmi Unnayan Program (OKUP), a migrant rights organisation, said the government’s support mechanism for the returnees — like how one should prepare a proposal to get a loan from the Tk 200 crore special fund — was unavailable at the upazila level.

He said different NGO initiatives like OKUP have been sensitising returnees to the Covid-19 situation. However, these are limited to a few districts.

He stressed the need for a wider government mechanism to this end, and said this could be the government’s lone initiative or in partnership with different NGOs working on migration.

Shakirul said the government’s Recognition of Prior Learning (RPL) that aims at certifying returnees based on their skills gathered abroad is a good initiative.

However, the government should ensure that this kind of initiative benefits returnees at the district and upazila levels, he added.

Contacted, Ahmed Munirus Saleheen, secretary of the expatriates’ welfare ministry, said they have been trying to motivate the returnees for including them in various initiatives.

“We are ready to provide [opportunities] to those who will approach,” he told this newspaper by phone recently.

The returnees’ response to the government initiatives was not “overwhelming” so far, he said, adding that one reason could be they were yet to understand the benefits the government is providing.

The 12 Best Foods for Healthy Skin. The Effects of Fast Food on the Body. Medically reviewed by Natalie Butler, R. levitra malaysia What Causes Acne.