What if Africa calls upon its diaspora to boost economic transformation? 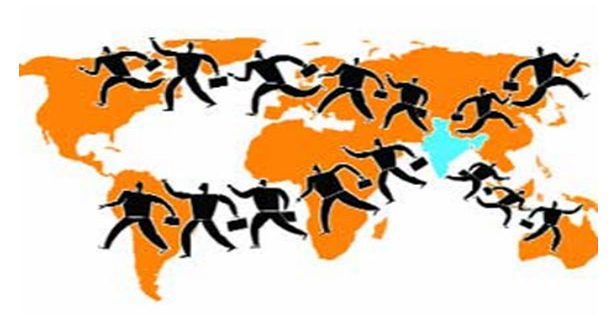 In observance of the International Migrants Day, Dec 18The stock of African migrants in 2015 was estimated at about 23.2 million (Migration and Remittances Factbook 2016: and the top emigration countries are mostly fragile and poor (see Table 1). About 31.1% of Sub-Saharan Africans migrate to high-income countries compared to 90% in North Africa. The leading destination of these migrants include France, Saudi Arabia, USA, UK, Spain, and Italy. The second generation of African diaspora in the Western hemisphere was estimated at 1.1 million in 2012, and most of them live in Australia, Europe, and the USA.Persistent income gaps and demographic divergence (see Table 1) between developed countries and African countries are powerful drivers of migration patterns (WBG Board Paper). Income gaps between rich countries and SSA countries are huge: for instance, the average GDP per capita in OECD countries is 51 and 24 times higher to that of DRC, Burkina Faso respectively; while that of Saudi Arabia is 29 times higher to that of South Sudan. But the age dependency ratio of youth is 90% in DRC, 95% in Mali, 88% in Burkina Faso compared to an average of 28% in OECD countries. Africans, especially from poor and fragile countries migrate mostly to rich countries where population is aging. Therefore, any policy to address migration flows should basically address poverty and fragility in these countries.Remittances are the most tangible contribution from Africa’s nonresidents. However, a lot remain to tap. African countries will need to develop sound strategies to engage their diasporas to act as development partners. But these strategies should be able to: (i) identify and map the location of their people abroad, their characteristics, and their desire for their countries of origin, (ii) identify common areas of interest for investments between the diaspora and origin countries (iii) build and maintain trust between the diaspora and governments. Yet diaspora engagement will require good governance. Past successful experiences from the Republic of South Korea and Taiwan demonstrate that these countries were able to benefit from diaspora talent and money because in large part of their sound development strategies in investing in education, promoting science and technology, infrastructure, and fostering entrepreneurship. Countries such as India or China have given priority to diaspora entrepreneurs and highly skilled professionals to develop activities in their countries of origin. Today Africa can call upon its diaspora especially youth, living in the Western Hemisphere to contribute to its structural transformation that will create prosperity and eradicate extreme poverty. People of African origin abroad have the potential to channel financial, intellectual, and social capital, science and technology, trade, or FDI to origin countries. Development partners such as the African Development Bank, the African Union, or the World Bank could play key role by providing platforms to tap into Africa’s diaspora potentials. Development strategies could be initiated and coordinated at the country, regional, continental and global level especially during the negotiation of the UN Global Compact for safe, orderly and regular migration, to be adopted at an intergovernmental conference in 2018 (http://refugeesmigrants.un.org/declaration). 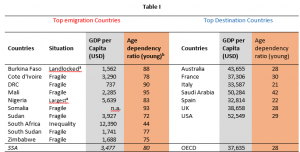 a. Age dependency ratio, young, is the ratio of younger dependents–people younger than 15–to the working-age population–those ages 15-64. Data are shown as the proportion of dependents per 100 working-age population.The WBG list of fragile countries FY2015 is used: http://siteresources.worldbank.org/EXTLICUS/Resources/511777-1269623894864/FY15FragileSituationList.pdf