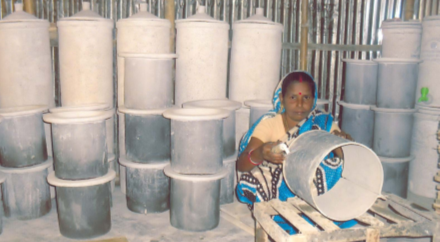 The 2nd phase of the 18 month long project titled, “Ensure Development Activities for Vulnerable and Under Privileged Rural Women in Bangladesh” is on progress. Being co-financed by Seva Network Foundation and Wilde Ganzen under ‘matching fund’ system, the project is being implemented by BASUG’s local partner, Endeavour in Bangladesh.

The project is being implemented basically through micro enterprises, which will have significant contribution in development of local and national economy. It is considered as one of the major instruments for increasing incomes and a better source of creation of employment. Through micro-enterprises, women will be able to earn extra income to support their family. Their dependency on men will be less. Rural poor women aged 18-55 of the project areas of Hobigonj are the main target beneficiaries of the project. However, in order to have a balance, a small percentage of men have been involved in the target group. It may be mentioned that BASUG project on Women Enterpreneurship, implented by its local partner, Endeavour was nominated as one of the Best Practices and was showcased at the first Knowledge Fair of EC-Un Joint Initiative on Migration and Development and was showcased at the first Knowledge Fair in Brussels in 2009.